The section of the Teatro del Fuoco & Food is dedicated to food, the Mediterranean diet is the protagonist thanks to the creative chef “Sicilian excellence.”

Fire is responsible for all of man’s transformation processes, of food, of good nutrition, wellness.

In the festival stages the best restaurants light up the appetite of tourists with the recipe of the Teatro del Fuoco and gastronomic tours are available by reservation. 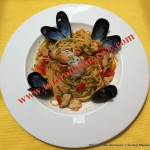 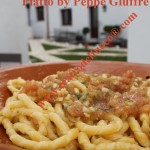 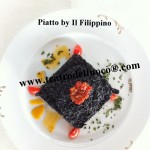 Pizza Teatro del Fuoco prepared with a dough made without yeast, cherry tomatoes, mozzarella, and added uncooked carrots, corn salad, Genoese zucchini marinated in chili, ginger and dried tomato; this special pizza is an up and down between the spicy, sweet and sour, it is pleasant alternation between soft and crisp, between the raw and the cooked, in full respect of natural flavors.This pizza is in E’ Cotta restaurant in Palermo.

Linguine Teatro del Fuoco
Refined bran pasta with abundant condiment of small squids, seafood and shrimp steamed with moscato wine of the Zucco and chili pepper power for the hottest palate. That’s the dish invented by the creative Gigi Mangia in Palermo.

Busiati Teatro del Fuoco
The Busiati trapanesi are dressed with the burning garlic of Nubia and also “siccagno” tomato, large leaf basil, almonds, salt crystals, aubergine, dark pepper and seasoned pecorino.
The dish has been created by the chef Peppe Giuffrè who has been inspired by the creative power of fire and its match with Sicilian identities; it’s available in his known restaurant Officina Gastronomica in Trapani.

Vulcanic Risotto
A new delicius dish made by Filippino, the most important restaurant of Eolian Islands.
The Risotto in made of black rice with small fishes and fragrant eolian erbs: the Risotto is a new way to get into the charming atmosphere of the Teatro del Fuoco Festival.