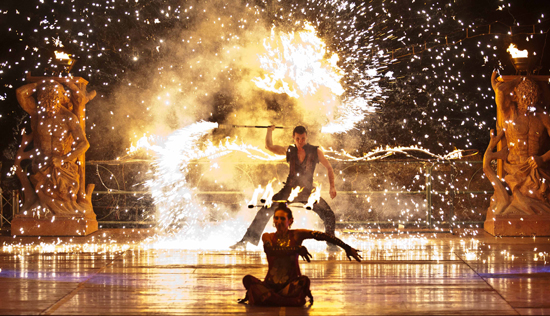 Teatro del Fuoco® was granted a product of cultural tourism and innovative marketing by the President of the Italian Republic and it is quoted in Forbes magazine as one of the 12 coolest festivals worth world travelling. Teatro del Fucoo performed for Ministery of Defence in Rome live TV.

The Teatro del Fuoco® is a company of performers that makes show with various forms of expression and an international festival that takes place every year since 2008 on tour between the Mediterranean islands.

Teatro del Fuoco® presents international artists that make shows with different body languages like mime, dance, music, acrobatics, lights and every year it organize a festival in tour in the Mediterranean islands.

The artists that are part of the Teatro del Fuoco were hired by big brands and reality, up to land in Tokyo for the event “Italia, amore mio!“.

A scientific committee combine the best of art, theater, tourism, anthropology. Observatory on Tourism in European Islands, Foundation I. Buttitta , Festival of homeopathy and human sciences, Elementi, Italian Institute of copper and precious professionals take part of the commettee.